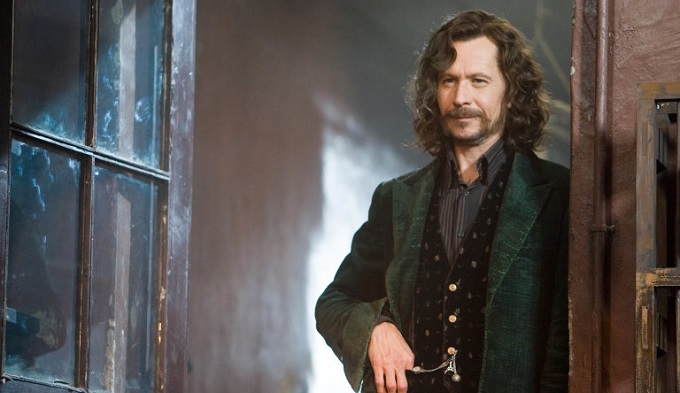 While re-reading Harry Potter and the Philosopher’s Stone, you’re bound to notice a few familiar names cropping up. Here are some we’ve spotted.

Before he knew he was a wizard, Harry met a ‘tiny man in a violet top hat’ who bowed to him at the shops. Dedalus was delighted that Harry remembered, but there was always more to this chirpy fellow than met the eye.

We next saw him in Order of the Phoenix, which wasn’t his first rodeo. After all, he’d been an original member of the Order along with Harry’s mum and dad. Dedalus continued to help Harry’s family as part of the escort mission when the Dursleys left Privet Drive. You’ve got to admire Dedalus’s dedication.

‘Young Sirius Black lent it me.’

Harry Potter and the Philosopher’s Stone

Admittedly most of us glossed over the man who lent Hagrid the flying motorbike, but how could we possibly have known how important that name was to the Potters? Sirius had been James’s schoolfriend and best man at his wedding, and was named as Harry’s godfather. But life can change in an instant.

Shortly after meeting Hagrid, Sirius was framed for murder and arrested – the next time we heard of him, he was book three’s eponymous ‘Prisoner of Azkaban’. And we thought he was just a friendly bloke who loaned out a cool bike.

Old Mrs Figg from down the road seemed like your average cat lady, but all that changed after the Dementor incident from Order of the Phoenix. Revealed to be a Squib with connections to Dumbledore, Arabella Doreen Figg knew all along about Harry and kept a watchful eye on him over the years.

Those cats of hers weren’t all they seemed either, essentially acting as kitty spies. We always suspected Mr Tibbles knew too much!

‘We could phone Marge,’ Uncle Vernon suggested.
‘Don’t be silly, Vernon, she hates the boy.’

Harry Potter and the Philosopher’s Stone

‘Hate’ might actually be an understatement. When Marge came to visit in Prisoner of Azkaban, we saw her treat Harry with the usual Dursley venom, which got worse in line with the volume of brandy she’d been guzzling.

After one particularly disgusting comment, using a female dog in an analogy of Harry’s mother, things blew up to a whole new level. Well, Marge did anyway and frankly, we’re not sorry.

We heard more about these Order members from Alastor Moody in Order of the Phoenix. Marlene McKinnon and Edgar Bones were killed along with their families on Voldemort’s orders and the brothers Gideon and Fabian Prewett ‘died like heroes’ after being taken down by no less than five Death Eaters.

Though these characters were dead long before the events of Philosopher’s Stone, we did get to meet some of their relatives in this book. Susan Bones joined Hufflepuff during Harry’s Sorting (her aunt Amelia would appear in Order of the Phoenix) and we saw one of the Prewetts showing her children on to platform nine and three-quarters. Most of us didn’t realise this, because Molly’s married name was ‘Weasley’.

The esteemed author of A History of Magic appeared on the Hogwarts first-year reading list – it was even thanks to her book that Harry found and picked the name ‘Hedwig’ for his owl. As a magical historian, Bathilda clearly knew her stuff… and it turned out she knew far more than she wrote in her book.

After all, she was a long-standing resident of Godric’s Hollow and had been a neighbour of the Dumbledores and the Potters in her time. Bathilda was interviewed for The Life and Lies of Albus Dumbledore but, as this was a Rita Skeeter publication, we couldn’t vouch for its accuracy. Bathilda eventually made an appearance (of sorts) to Harry and Hermione in Deathly Hallows, but not one that we like to think about in a hurry.